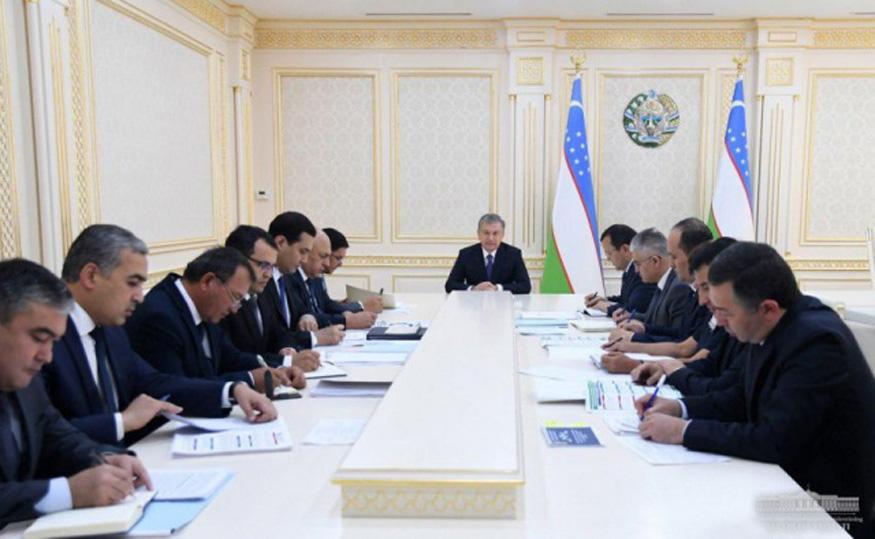 On September 6, the President of the Republic of Uzbekistan Shavkat Mirziyoyev held a meeting on the priority tasks of development of agriculture in 2020-2030.
Uzbekistan has great potential in the agricultural sector. Success in resolving many socio-economic issues – from abundance and prosperity to providing additional income from exports – depends on development of this industry.
In recent years, a number of measures have been taken for reforming agriculture and introducing market mechanisms. As a result of an increase in government procurement prices, the interest of agricultural producers has almost tripled. Cotton and grain growing became a real source of profit.
In order to introduce new technologies and innovations, increase labor productivity and the wages of workers in the sphere, 76 cotton-textile clusters were organized.
In the current year, water-saving irrigation technologies were introduced on 25 thousand hectares of cotton fields. Large-scale activity on restoration of 1 million 100 thousand hectares of degraded land has begun.
These are certainly good results, but this is just the first stage of transformations in this area.
The President sets the task to bring the reforms in the industry to a new level, not only living today, but also thinking over actions with an eye to the long term. To this end, the development strategy of agriculture for 2020-2030 is being developed, which is designed to become the main point of growth, the driver of the economy. Thousands of new jobs will be created, people’s incomes will increase.
Important tasks for implementing this strategy were identified at the meeting.
It was noted that, first of all, it is necessary to organize accurate accounting of agricultural lands and improve their use. In this regard, the State Committee of the Republic of Uzbekistan on Land Resources, Geodesy, Cartography and State Cadastre was instructed to complete land inventory activities in all regions of the country by the end of 2021 and create a unified electronic database for keeping its records.
It was emphasized that the owner of the land will strive to increase productivity, cultivate crops for many years only when he is fully confident in the future. The President noted the need for reviewing the legislation to ensure a transparent land allocation system and land rights guarantees.
The rational use of water resources is also very important. As the analysis shows, billions of cubic meters of water are allocated to irrigate crops in the country, but only 60 percent reach the fields, the rest is lost in irrigation systems and in the irrigation process.
According to the forecasts of the World Resources Institute, by 2040 Uzbekistan may become among 33 countries of the world with acute shortage of water.
In this regard, the Head of the state paid special attention to this issue and noted the need for increasing efficiency and recording water use, introducing water-saving technologies on 200 thousand hectares of land each year. It was noted that these tasks should be reflected in the strategy being developed.
During the discussion of the state support for agriculture and improving the public procurement system, it was pointed out that it is necessary to direct the bulk of budgetary funds to increase the fertility of lands, introduce water-saving technologies and develop science.
Particular emphasis at the meeting was made on issues of increasing the export potential of the sphere and increasing the volume of procurement of products, the world experience was analyzed.
For example, in Turkey, products worth 2 thousand dollars are grown on 1 hectare of land, in Egypt – for 8 thousand dollars, and in Israel – 12 thousand dollars. In Uzbekistan, this figure does not exceed 300 USD. Domestic products cannot withstand competition in the foreign market, as it does not meet the standards.
At the meeting, responsible persons were instructed to introduce a product certification system based on the standards of the European Union, East Asia and the Arab world.
Private land represents a large reserve for agriculture, and therefore, the widespread introduction of logistics and local cooperation based on the principle of “one makhalla – one product” is necessary.
There are also disadvantages in the service sector. Due to the lack of competition, there is a high cost of services, product manufacturers have no choice.
Therefore, the need for expanding the range of services in the field of delivery of mineral fertilizers, equipment and others on the basis of public-private partnerships, the organization of private enterprises was indicated.
The necessity was indicated for the completion by the end of 2020 of the work on space sounding, which will make it possible to give a reliable assessment of the real state of land and crops. As a result, this system will provide comprehensive information about the vegetative process, reclamation state and level of soil mineralization, moisture, which will contribute to an increase in productivity by 25-30 percent.
Responsible persons were instructed to introduce digital technologies at all stages from the placement of crops to the sale of finished products.
Qualified personnel are needed for effectively organizing the implementation of these tasks. The importance of introducing a new teaching methodology in specialized higher education institutions on the basis of international experience, the organization of on-site trainings and workshops was noted.
Instructions were given on creation of early-ripening varieties of crops and livestock breeds corresponding to the climatic conditions, and the commercialization of scientific developments.
In general, the new strategy will contribute to the introduction of market mechanisms in agriculture, the establishment of science-based production, which will lead to more efficient food security, a multiple increase in exports and the volume of food products per capita.