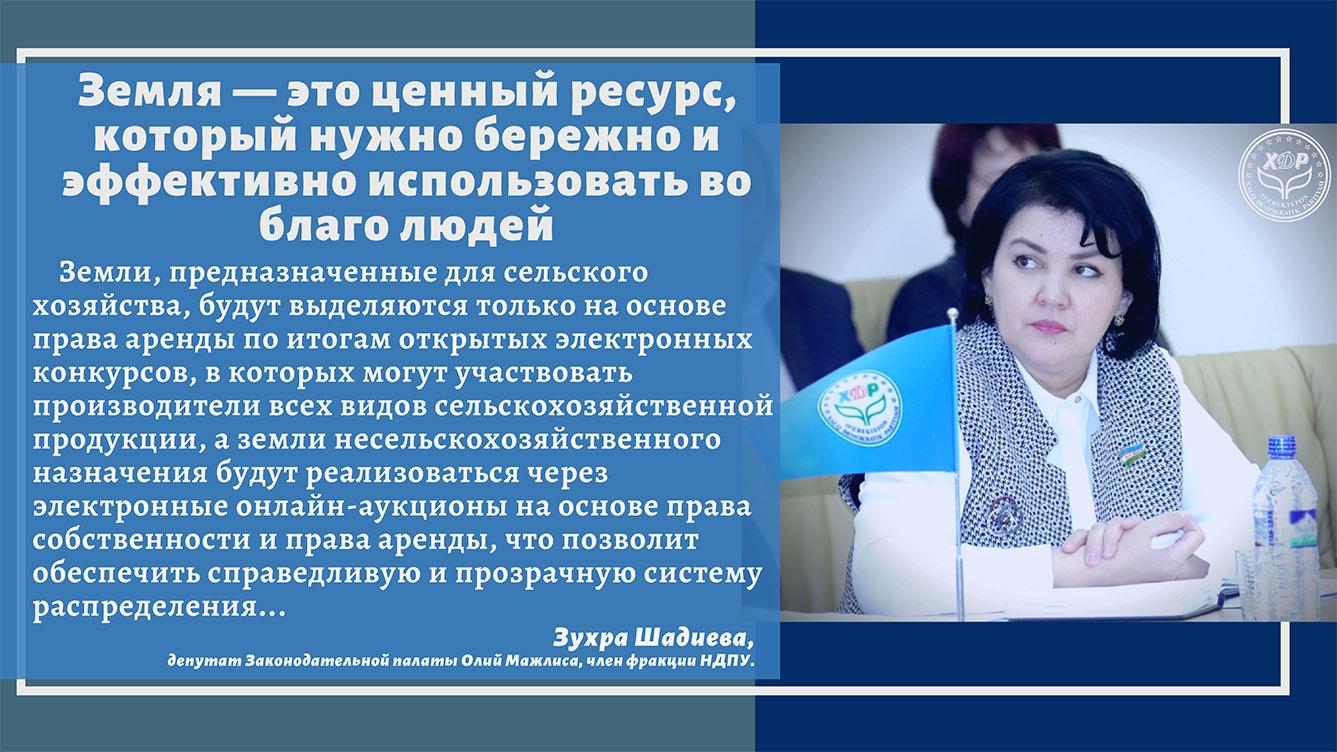 The land is a valuable natural resource that is involved in the production of goods and services through the use of capital, labor, entrepreneurial ability and information, and is one of the factors of production in sectors of the economy, especially in the agricultural sector. For example, many developing countries such as China, India, Brazil, Vietnam have achieved economic growth due to the rapid growth of agriculture and its productivity. The increase in labor productivity in agriculture makes it possible to provide an increasing part of the population with food. For Uzbekistan, agriculture is an important sector of the economy, accounting for about 25.5% of GDP and employing about 27% of the labor force. Moreover, the land is used in the construction industry for building cities, houses, railways and other sectors of the economy.

In this regard, the regulation of land tenure and land use issues between participants in land relations are one of the key ones, since, in recent years, cases of illegal sale of land plots, arbitrary seizure or allocation of land with violations of the law, and unfair distribution of land by local authorities have become more frequent. And this leads to significant disagreements among the local population.

The President of Uzbekistan announced a reform of the land sale and allocation system to regulate the distribution and use of land in the country. According to the Decree, land plots will be allocated based on ownership and lease rights, as well as based on permanent use rights.

According to the Decree, from August 1, 2021, land plots under the right of ownership and lease will be transferred to the private sector, and the right of permanent use will be transferred to state bodies, institutions, enterprises, and civil society institutions. Until the decree is issued, such rights to the allocated land plots are retained by their owners following the current procedure.

Land designated for agriculture will be allocated only based on a lease right on the results of open electronic tenders in which producers of all types of agricultural products can participate. Non-agricultural land will be sold through electronic online auctions based on ownership and lease rights, which will ensure a fair and transparent distribution system.

By this decree, local government bodies are deprived of several powers, as well as the right to make decisions, orders or other types of documents related to land relations.

In addition, from August 1, as an exception, the Cabinet of Ministers has the right to lease land directly only to state research and educational institutions for the implementation of scientific research and test experiments in agriculture, agro-industrial clusters, and for the implementation of a large investment project determined by the selection of the best offer worth at least $10 million.

The Decree also envisages the establishment of a Republican Council for the early detection of violations of land legislation and coordination of activities aimed at preventing them, which will prevent cases of corruption and illegal, unfair distribution of land.

The issue of land allocation has always been one of the important and controversial issues, and in this regard, the Presidential Decree, developed based on in-depth analysis, is timely, effective, which meets the requirements of the market. As a result of the effective use of land resources, the economic potential of our regions, the standard of living and income of the population, the level of employment and the well-being of people, in general, will increase. And we, the deputies, must also make our contribution by introducing amendments and additions arising from this Decree to the Land Code of the Republic of Uzbekistan and other relevant laws, as well as to convey the essence of the Decree to our voters in the districts.

Member of the PDPU Faction.