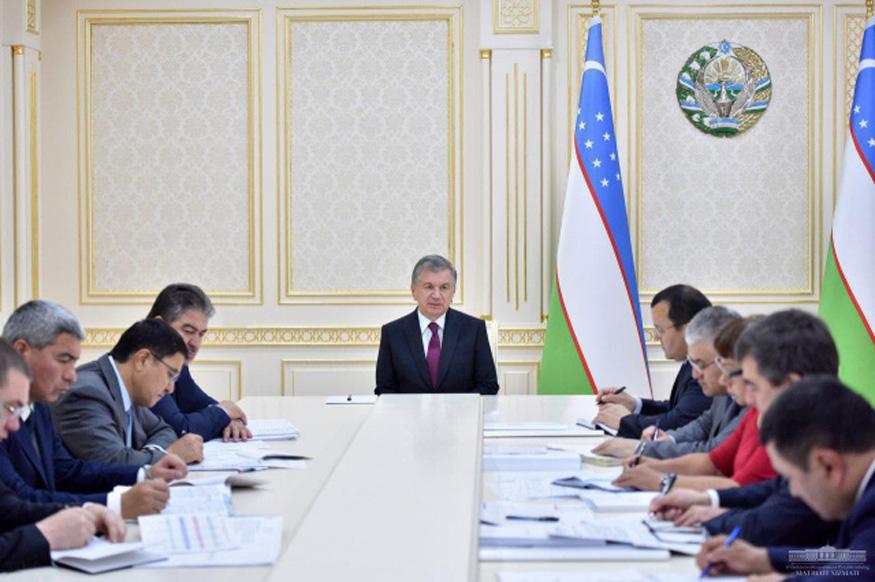 President Shavkat Mirziyoyev held a meeting on September 5 to deliberate on the comprehensive preparation of economy sectors and social facilities for sustainable work in the autumn-winter period.
Corresponding measures were outlined in the resolution of the President signed on July 30 this year. In accordance with the document, Republican Commission chaired by the Prime Minister was formed, specific tasks of all responsible government bodies for preparing for the winter were defined. Consistent efforts are underway to ensure uninterrupted supply of private homes, social institutions and enterprises with heat, and repair boiler rooms and networks.
The meeting participants analyzed the activities of enterprises in the fuel and energy complex, and identified further measures.
It was noted that it is imperative to meet the energy needs of the population and sectors of the economy in the autumn-winter period, which requires effective implementation of a program to increase natural gas production. The Cabinet of Ministers, the Ministry of Energy were instructed to maximize the opportunities available to meet the needs of consumers.
The Uztransgaz and Hududgaztaminot joint-stock companies were tasked with completing the overhaul and reconstruction of 93 kilometers of gas pipelines and 172 gas distribution points by November 1 this year, and creating a gas reserve in underground storage facilities. The importance of launching new compressor stations at Mubarekneftegaz and Gazlineftegazdobycha enterprises was indicated.
In the fall-winter season, 245 thousand tons of liquefied gas is scheduled to be delivered to the population. The President insisted at the meeting that the needs of the population be deeply studied in the context of each region and, if necessary, additional volumes of liquefied gas be delivered.
Shavkat Mirziyoyev instructed the officials to put into operation new and upgrade the existing capacities for producing propane-butane mixture at the Mubarek Gas Processing Plant, the Gazlineftegazdobycha and Shurtanneftegaz enterprises.
It is expected that in the coming season the demand for electricity will increase by 11.5 percent compared to last year.
In this regard, the Ministry of Energy has been instructed to provide, in October, for the overhaul of 7 power units, 7 boiler units, 1 gas turbine and 1 combined cycle plant (CCP) in thermal power stations.
It is essential, as it was underlined, to commission the second 450 MW combined cycle plant at Navoi Thermal Power Station before the end of this year, bring the first CCP unit to the design capacity and launch the second such installation at Turakurgan Thermal Power Station. Measures for reconstruction and modernization of 3,500 kilometers of power networks and 1,171 transformer points by December this year were defined.
The ministries of energy and finance, the joint-stock company Uzbekiston Temir Yollari have been instructed to fully meet the population’s need for coal in the autumn-winter months. Special attention is to be attached to prevent excessive growth in coal prices for the population, and therefore transportation privileges should be applied.
The meeting served also to discuss the state of readiness of drinking water supply and heat supply networks for the fall-winter season. The leadership of the Ministry of Housing and Public Utility Services and local khokimiyats were seriously criticized for the deficiencies in this area. They were tasked with speeding up and completing the works on repairing the heat and water supply systems and apartment buildings within a brief span of time.