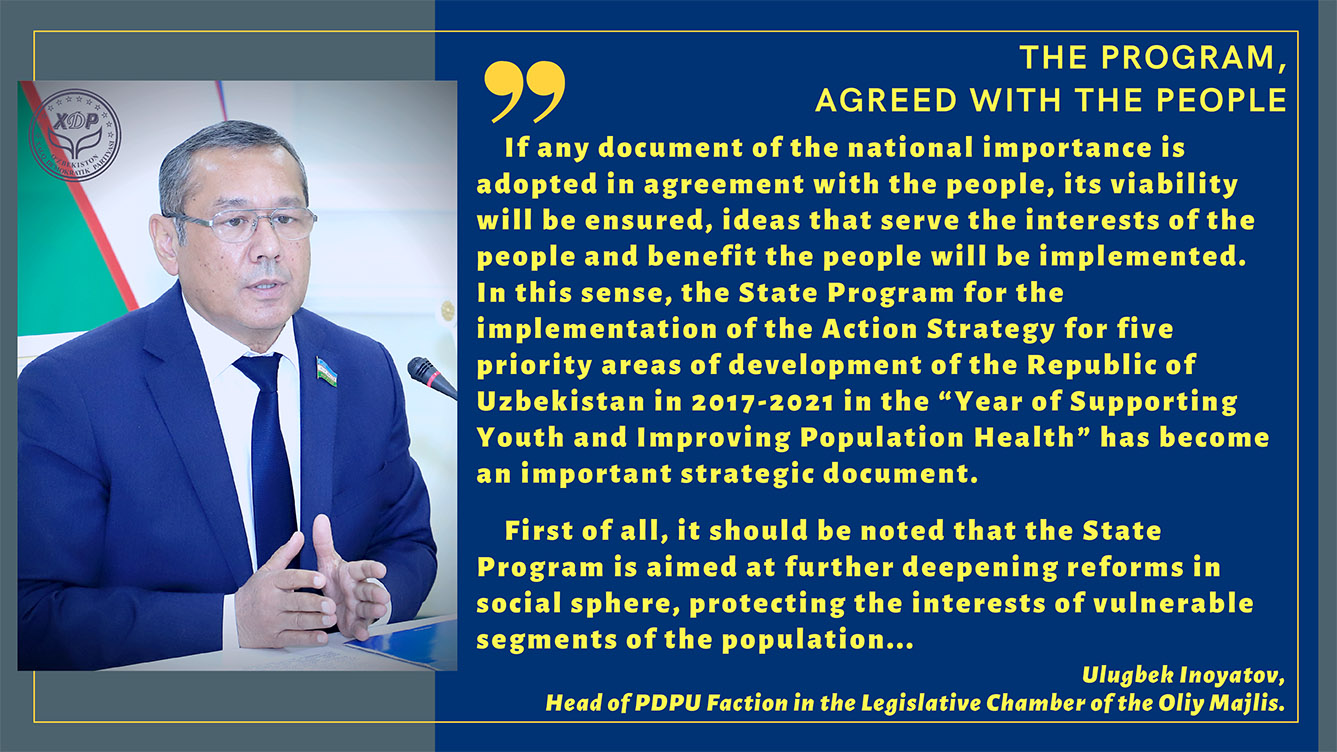 If any document of the national importance is adopted in agreement with the people, its viability will be ensured, ideas that serve the interests of the people and benefit the people will be implemented. In this sense, the State Program for the implementation of the Action Strategy for five priority areas of development of the Republic of Uzbekistan in 2017-2021 in the “Year of Supporting Youth and Improving Population Health” has become an important strategic document.

First of all, it should be noted that the State Program is aimed at further deepening reforms in social sphere, protecting the interests of vulnerable segments of the population.

The State program consisting of 274 paragraphs also includes urgent tasks for improving the system of state and social construction. This has a deep meaning. In other words, special attention in the program is paid to the consistent continuation of reforms aimed at deepening democratic reforms in the country, ensuring in practice the principle “it is not the people who should serve the government, but the government should serve the people”, and the elimination of bureaucratic obstacles.

In the state program, special attention is paid to socio-economic issues of fundamental importance for the People’s Democratic Party of Uzbekistan, specific directions for their solution are outlined. The mechanisms of implementation of more than 10 issues forwarded in the Pre-Election Program of the PDPU are covered.

In particular, the important tasks outlined in the State Program for reducing poverty and improving the wellbeing of people, creating favorable conditions for citizens when assigning pensions and benefits, providing housing for 900 orphans brought up in charity homes, training and vocational guidance, children in need of social protection, the creation of a Children’s Support Fund for the treatment of children with serious illnesses are fully consonant with the program goals of our party.

The most effective way to combat poverty and dependency sentiment, to modernize the social protection system in the long term is to pay more attention to the education system and human capital. The situation in a needy, poor family can be radically changed by providing children with a qualitative education. Effective implementation of education and vocational training plays an important role in reducing unemployment, increasing opportunities for self-employment, and fighting poverty.

In order to support young people, improve the protection system for students in need of social protection, ensure the principle of social justice, the number of state grants for higher education will be increased by 25%, and the number of state grants for girls from low-income families will be doubled, which has a large social significance for our party.

The execution of these tasks will allow to support young people who want to study and master professions, but do not have the opportunity due to difficulties in the family, to change their outlook on life, to strengthen confidence in the future.

In general, doors of great opportunities are opening up for young people who want to study, learn and work. The ranks of such active and initiative youth with progressive thinking and new creative ideas will enhance even more.

There is no state in the world that would not face the problems associated with the poverty of a certain part of the population, its inactivity in society. Various factors influenced the problem of poverty in the historical and social conditions of our country. However, the truth is that our people have never tired of working, have not been indifferent to the issue of improving their lives. We are only required to provide a little help and support to some of our compatriots in getting an education, mastering professions, and financial issues.

According to the state program, this year marks the beginning of an important period of socio-economic transformations for both our state and our people. A completely new social protection system will be created as an integral part and a logical continuation of last year’s reforms.

In particular, the practice of allocating subsidies in the amount of up to 7 million soums to citizens included in the “iron”, “women’s” and “youth” notebooks for the purchase of necessary equipment for starting own business will be introduced to develop the economy, reduce poverty and create a basis for long-term sustainable economic growth. This will help our compatriots who have new ideas and initiatives, who intend to start their own business, but are experiencing funding difficulties. As a result, self-employment of thousands of our compatriots will be ensured.

Of course, such plans, started with good intentions, must be put into practice. We will carry out strict parliamentary and deputy control over how the tasks set in the State Program are being carried out, whether irresponsibility and indifference to their implementation at places is not allowed. In this regard, this year we will start working in a new order. In particular, strict parliamentary control over the implementation of social tasks set in the Program will be established. Our party groups in local councils will promptly analyze the local situation and present at the session issues on items that have not been completed in time or have been executed poorly. Based on their results, our parliamentary faction will hear information and reports from responsible ministries.

Head of PDPU Faction in the Legislative Chamber of the Oliy Majlis.